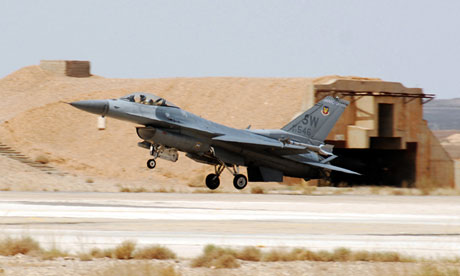 The Syrian air force is considering using kamikaze pilots against attacks by western forces, a Syrian army officer operating air defences near Damascus has claimed in an interview with the Guardian.

The officer said 13 pilots had signed a pledge this week saying they would form "a crew of suicide martyrs to foil the US warplanes".

The Assad loyalist, in his 30s and serving with the Syrian army's air defence section 10 miles from the capital, said: "If the US and British armies launch a single rocket we will launch three or four, and if their warplanes raid our skies they will face hell fire.

"If we are unable to shoot down their warplanes with artillery, we have military pilots who are ready to attack these foreign warplanes by their own warplanes and blow them up in the air."

The Guardian has been unable to verify the information. The officer has been in contact with the paper on several occasions over the last 12 months during which time he provided reliable information about battles between the troops of Bashar al-Assad and rebel groups. He has declined to provide accounts of events where he has not served.

He claimed: "We have more than 8,000 suicide martyrs within the Syrian army, ready to carry out martyrdom operations at any moment to stop the Americans and the British. I myself am ready to blow myself up against US aircraft carriers to stop them attacking Syria and its people."

Speaking about the chemical attack last week on the outskirts of Damascus, he denied the involvement of government forces and said news of the gassing had come as a shock.

He said the morale of the Syrian army was high. "They have to know thatIran and Hezbollah fighters will be fighting with us, hand-in-hand. We have an alliance of protection. We are the resistance axe in the Arab world.

"We are ready for anything. Only God can take our souls, not America or Britain. The US and UK have been threatening us for more than two years now, they think we would care, but they are stupid to think so. We have been fighting the most criminal terrorists in the world and we have not given up or become tired.

"The Syrian army is at the highest state of alert now. We have taken all measures to avoid the air onslaught and all our rockets are ready now to be launched. We are expecting the US and British forces to attack specific targets, so the Syrian army has changed most of its positions and many barracks and brigades have been moved to different sites."

Reuters news agency said Assad's forces appeared to have evacuated most personnel from army and security command headquarters in central Damascus in preparation for a western military strike.

"It is unbelievable what is happening now in Syria," the officer said. "Lots of Syrian men are flocking to checkpoints asking to join the army to fight for Syria, though some of them were previously with the opposition."

He added: "They say that when Syria is under foreign attack we will fight with the Syrian army and forget about everything. In Damascus, we have registered over 4,000 civilian volunteers in the last 48 hours. We have sent them to training camps to learn how to use different weapons and to form people committees [pro-regime home guards] to protect the streets and districts of the capital, as the Syrian army will be busy dealing with the US warplanes.

"The whole army will be in a state of alert and we will need these people to protect our back, keep security and stop things slipping to chaos.

"Damascus residents are living a normal life and are not scared of any attack. Rockets and mortars are falling on the capital districts every day even in the poshest areas, so they can't be shaken any more if US rockets strike.

"People get used to the war and they do not need to make any more preparations. Today I could see long bread queues in many areas in Damascus, and that may be because of the US threats. People are worried if the US and British forces launch their attack against Syria they can't go out during the air raids."