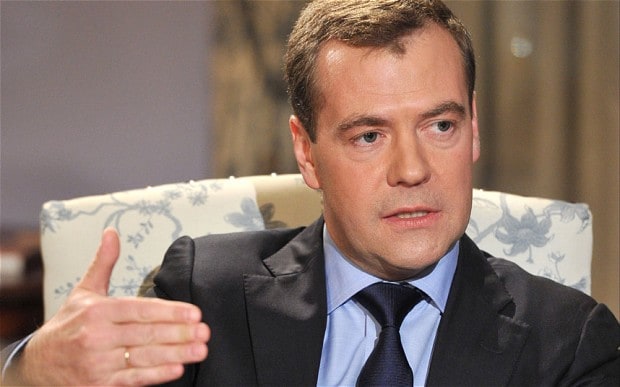 Mr Medvedev let his guard down after an interview with five Russiantelevision stations when he failed to realise the cameras were still rolling.

"I believe in Father Frost. But not too deeply. But anyway, you know, I'm not one of those people who are able to tell the kids that Father Frost does not exist," he said in a jovial reply to a question about Russia's equivalent of Santa Claus.

He went on to make an unflattering allusion to Putin's frequent lateness for meetings.

"Colleagues, somebody should be extremely punctual, while somebody else is exhausting all the limits for being late," he said, smiling wryly on a day when his mentor was more than an hour late for an event in southern Russia.

The comments touched off satire on the internet which is unlikely to help Mr Medvedev, whose star has waned since Mr Putin took over from him as president in May after a four-year interval.

In the interview itself, Mr Medvedev underlined his allegiance to Mr Putin and appeared determined to show he is in step with his ally to dismiss rumours he is about to be fired.

Mr Medvedev defended Kremlin-backed laws which critics say will be used to stifle dissent and which appear out of sync with the prime minister's relatively liberal image.

But in the off-air comments, he was less guarded.

When one of the five journalists who interviewed him complained about federal investigators arriving to search the home of a witness in an inquiry early in the morning, Mr Medvedev told the journalist not to worry before stepping out of shot.

But his microphone was still switched on when he said casually: "They are just jerks, so they come at eight in the morning. It's just their set of habits. I know many people who work in the police. They think if they come at seven in the morning they will get everything in the world."

Another of the journalists asked whether the president is handed secret files on aliens when receiving the briefcase needed to activate Russia's nuclear arsenal.

"Along with the briefcase with nuclear codes, the president of the country is given a special 'top secret' folder. This folder in its entirety contains information about aliens who visited our planet," Mr Medvedev answered playfully.

"Along with this, you are given a report of the absolutely secret special service that exercises control over aliens on the territory of our country ... More detailed information on this topic you can get from a well-known movie called 'Men In Black' ... I will not tell you how many of them are among us because it may cause panic," he says.

None of the television stations that interviewed Mr Medvedev broadcast the off-air comments, but they were delivered to Reuters as a pool signal and some were shown on YouTube.

Mr Medvedev's standing has declined since he and Putin announced in September last year that the former KGB spy planned to return to the presidency, ending speculation his protege could stay on.

But some political analysts give Mr Medvedev only until March or April as prime minister, citing turf wars between rival interest groups.

Even during the interview itself, Mr Medvedev answered some unusual questions. Asked whether he believed the world would end on Dec. 21 under a New Age prophecy, he said no.

He said he might have another tilt at the presidency if the Russian people want it. But he won little acclaim on the internet.

"It's sad when the former president and current prime minister of your country is simply a pathetic person," Yekaterina Kudinova wrote on Twitter.