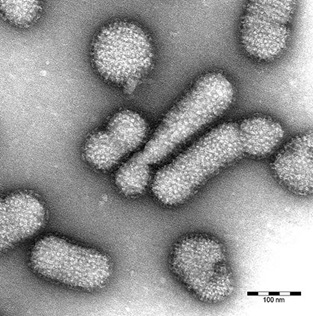 Scientists Brace for Media Storm Around Controversial Flu Studies
by Martin Enserink on 23 November 2011
ROTTERDAM, THE NETHERLANDS—Locked up in the bowels of the medical faculty building here and accessible to only a handful of scientists lies a man-made flu virus that could change world history if it were ever set free.

The virus is an H5N1 avian influenza strain that has been genetically altered and is now easily transmissible between ferrets, the animals that most closely mimic the human response to flu. Scientists believe it's likely that the pathogen, if it emerged in nature or were released, would trigger an influenza pandemic, quite possibly with many millions of deaths.

In a 17th floor office in the same building, virologist Ron Fouchier of Erasmus Medical Center calmly explains why his team created what he says is "probably one of the most dangerous viruses you can make"—and why he wants to publish a paper describing how they did it. Fouchier is also bracing for a media storm. After he talked toScienceInsider yesterday, he had an appointment with an institutional press officer to chart a communication strategy.

Fouchier's paper is one of two studies that have triggered an intense debate about the limits of scientific freedom and that could portend changes in the way U.S. researchers handle so-called dual-use research: studies that have a potential public health benefit but could also be useful for nefarious purposes like biowarfare or bioterrorism.

The other study—also on H5N1, and with comparable results—was done by a team led by virologist Yoshihiro Kawaoka at the University of Wisconsin, Madison, and the University of Tokyo, several scientists toldScienceInsider. (Kawaoka did not respond to interview requests.) Both studies have been submitted for publication, and both are currently under review by the U.S. National Science Advisory Board for Biosecurity (NSABB), which on a few previous occasions has been asked by scientists or journals to review papers that caused worries.

NSABB chair Paul Keim, a microbial geneticist, says he cannot discuss specific studies but confirms that the board has "worked very hard and very intensely for several weeks on studies about H5N1 transmissibility in mammals." The group plans to issue a public statement soon, says Keim, and is likely to issue additional recommendations about this type of research. "We'll have a lot to say," he says.

"I can't think of another pathogenic organism that is as scary as this one," adds Keim, who has worked on anthrax for many years. "I don't think anthrax is scary at all compared to this."

Some scientists say that's reason enough not to do such research. The virus could escape from the lab, or bioterrorists or rogue nations could use the published results to fashion a bioweapon with the potential for mass destruction, they say. "This work should never have been done," says Richard Ebright, a molecular biologist at Rutgers University in Piscataway, New Jersey, and the Howard Hughes Medical Institute who has a strong interest in biosecurity issues.

The research by the Kawaoka and Fouchier teams set out to answer a question that has long puzzled scientists: Does H5N1, which rarely causes human disease, have the potential to trigger a pandemic? The virus has decimated poultry flocks on three continents but has caused fewer than 600 known cases of flu in humans since it emerged in Asia in 1997, although those rare human cases are often fatal. Because the virus spreads very inefficiently between humans it has been unable to set off a chain reaction and circle the globe.

Some scientists think the virus is probably unable to trigger a pandemic, because adapting to a human host would likely make it unable to reproduce. Some also believe the virus would need to reshuffle its genes with a human strain, a process called reassortment, that some believe is most likely to occur in pigs, which host both human and avian strains. Based on past experience, some scientists have also argued that flu pandemics can only be caused by H1, H2, and H3 viruses, which have been replaced by each other in the human population every so many decades—but not by H5.

Fouchier says his study shows all of that to be wrong.

Although he declined to discuss details of the research because the paper is still under review, Fouchier confirmed the details given in news stories in New Scientist and Scientific American about a September meeting in Malta where he first presented the study. Those stories describe how Fouchier initially tried to make the virus more transmissible by making specific changes to its genome, using a process called reverse genetics; when that failed, he passed the virus from one ferret to another multiple times, a low-tech and time-honored method of making a pathogen adapt to a new host.

After 10 generations, the virus had become "airborne": Healthy ferrets became infected simply by being housed in a cage next to a sick one. The airborne strain had five mutations in two genes, each of which have already been found in nature, Fouchier says; just never all at once in the same strain.

Ferrets aren't humans, but in studies to date, any influenza strain that has been able to pass among ferrets has also been transmissible among humans, and vice versa, says Fouchier: "That could be different this time, but I wouldn't bet any money on it."

The specter of an H5N1 pandemic keeps flu scientists up at night because of the virus's power to kill. Of the known cases so far, more than half were fatal. The real case-fatality rate is probably lower because an unknown number of milder cases are never diagnosed and reported, but scientists agree that the virus is vicious. Based on Fouchier's talk in Malta, New Scientist reported that the strain created by the Rotterdam team is just as lethal to ferrets as the original one.

"These studies are very important," says biodefense and flu expert Michael Osterholm, director of the Center for Infectious Disease Research and Policy at the University of Minnesota, Twin Cities. The researchers "have the full support of the influenza community," Osterholm says, because there are potential benefits for public health. For instance, the results show that those downplaying the risks of an H5N1 pandemic should think again, he says.

Knowing the exact mutations that make the virus transmissible also enables scientists to look for them in the field and take more aggressive control measures when one or more show up, adds Fouchier. The study also enables researchers to test whether H5N1 vaccines and antiviral drugs would work against the new strain.

Fouchier says he consulted widely within the Netherlands before submitting his manuscript for publication. The U.S. National Institutes of Health (NIH), which funded the work, has agreed to the publication, says Fouchier, including officials at the National Institute of Allergy and Infectious Diseases. (NIH declined to answer questions for this story.) Now, Fouchier is eagerly waiting for NSABB's judgment.

Osterholm says he can't discuss details of the papers because he's an NSABB member. But he says it should be possible to omit certain key details from controversial papers and make them available to people who really need to know. "We don't want to give bad guys a road map on how to make bad bugs really bad," he says.

But some scientists say the board's debate comes far too late, because the studies have been done and the papers are written. "This is a good example of the need for a robust and independent system of PRIOR review and approval of potentially dangerous experiments," retired arms control researcher Mark Wheelis of the University of California, Davis, wrote to ScienceInsider in an e-mail. "Blocking publication may provide some small increment of safety, but it will be very modest compared to the benefits of not doing the work in the first place."

Scientists have long discussed whether to have mandatory reviews of dual-use studies before they begin, and given the global risks, some have even argued for some international risk assessment system for pandemic viruses. For instance, a proposal by four researchers from the Center for International and Security Studies at Maryland would have classified Fouchier's work as an "activity of extreme concern" that would have required international pre-approval.

But NSABB advised against such mandatory systems in 2007, and most countries don't have formal mechanisms in place to review studies before they start. (In the United States, it's "recommended" that researchers ask an institutional review board for advice if they think a study raises concerns.) Fouchier's study was greenlighted in advance by the Dutch Commission on Genetic Modification (COGEM), but that only means the panel is satisfied with safety procedures at Fouchier's lab, explains chair Bastiaan Zoeteman; it's not COGEM's job to decide whether a study is desirable. NIH didn't give the funding proposal a special review either, says Fouchier.

"The creation of a pandemic virus has been the classical example of dual-use research of concern the past decade," says Ebright. "It's remarkable that the NSABB is discussing it in 2011."

Keim agrees about the need for reviews up front. "The process of identifying dual use of concern is something that should start at the very first glimmer of an experiment," he says. "You shouldn't wait until you have submitted a paper before you decide it's dangerous. Scientists and institutions and funding agencies should be looking at this. The journals and the journals' reviewers should be the last resort."

NSABB does not have the power to prevent the publication of papers, but it could ask journals not to publish. Even Ebright, however, says he's against efforts to ban the publication of the studies now that they have been done. "You cannot post hoc suppress work that was done and completed in a nonclassified context," he says. "The scientific community would not stand for that."