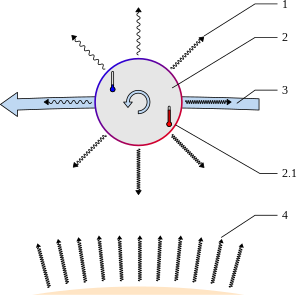 The Yarkovsky effect is a force acting on a rotating body in space caused by the anisotropic emission of thermal photons, which carry momentum. It is usually considered in relation to meteoroids or smallasteroids (about 10 cm to 10 km in diameter), as its influence is most significant for these bodies.

The effect was discovered by the Russian civil engineer Ivan Osipovich Yarkovsky (1844–1902), who worked on scientific problems in his spare time. Writing in a pamphlet around the year 1900, Yarkovsky noted that the diurnal heating of a rotating object in space would cause it to experience a force that, while tiny, could lead to large long-term effects in the orbits of small bodies, especially meteoroids and small asteroids. Yarkovsky's insight would have been forgotten had it not been for the Estonian astronomer Ernst J. Öpik (1893–1985), who read Yarkovsky's pamphlet sometime around 1909. Decades later, Öpik, recalling the pamphlet from memory, discussed the possible importance of the Yarkovsky effect on movement of meteoroids about the Solar System.[1]

The Yarkovsky effect is a consequence of the fact that change in the temperature of an object warmed by radiation (and therefore the intensity of thermal radiation from the object) lags behind changes in the incoming radiation. That is, the surface of the object takes time to become warm when first illuminated; and takes time to cool down when illumination stops. In general there are two components to the effect:

The above details can become more complicated for bodies in strongly eccentric orbits.

The effect was first measured in 1991-2003 on the asteroid 6489 Golevka. The asteroid drifted 15 km from its predicted position over twelve years (the orbit was established with great precision by a series of radar observations in 1991, 1995 and 1999).[2]

In general, the effect is size dependent, and will affect the semi-major axis of smaller asteroids, while leaving large asteroids practically unaffected. For kilometre-sized asteroids, the Yarkovsky effect is minuscule over short periods: the force on 6489 Golevka is estimated at about 0.25 newton, for a net acceleration of 10−10 m/s². But it is steady; over millions of years an asteroid's orbit can be perturbed enough to transport it from the asteroid belt to the inner Solar System.

For a specific asteroid, it is very hard to predict the exact impact of the Yarkovsky effect on its orbit. This is because its magnitude depends on many variables that are hard to determine from the limited observational information that is available. These include the exact shape of the asteroid, its orientation, and its albedo, along with its variations over the surface and with wavelength. Calculations are further complicated by the effects of shadowing and thermal "reillumination", whether caused by local craters or a possible overall concave shape. The Yarkovsky effect also competes with radiation pressure, whose net effect may cause similar small long-term forces for bodies with albedo variations and/or non-spherical shapes.

As an example, even for the simple case of the pure seasonal Yarkovsky effect on a spherical body in a circular orbit with 90° obliquity, semi-major axis changes could differ by as much as a factor of two between the case of a uniform albedo and the case of a strong north/south albedo asymmetry. Depending on the object's orbit and spin axis, the Yarkovsky change of the semi-major axis may be reversed simply by changing from a spherical to a non-spherical shape.