A New HIV Strain Is Running Wild In Siberia


In public health, epidemiologists could be best regarded as microbial detectives. They are tasked with the unenviable position of having to examine an outbreak to determine not only the cause but also the potential consequences if the culprit is not controlled.

At one time, the tools were limited to medical files, territorial maps and the testimonies of those infected and treating the sick. Today, epidemiologists have an assortment of laboratory techniques — from molecular biology to geographic information systems — to hunt down clues and find answers before the situation grows dire.

But even with modern day advancements, sometimes the appearance of a pathogen can take even the hardiest of epidemiologists by surprise. Such was the case with the Severe Acute Respiratory Syndrome coronavirus and its related cousin, the Middle East Respiratory Syndrome (MERS) coronavirus as well as the H5N1 avian flu and the H1N1pdm strain that caused the latest pandemic. When these infections struck, the world was put on edge and public health officials worked tirelessly to find answers to prevent the loss of life.

Now a new strain of concern appears to be emerging. A few weeks ago, news broke out of the Siberian Federal District that a previously unseen HIV strain had not only been detected but also was spreading across several regions of the territory at an incredible pace. The strain is noted as Circulating Recombinant Form 02_AG/A (CRF02_AG/A). In the stories, based on the information provided by Dr. Natalya Gashnikova, head of the Retroviruses Department at the State Biotechnology Research Center — better known as Vector — the virus had spread like wildfire making up over 50% of new HIV cases. What was worse was the fact that it appeared to be the most virulent form of the virus in Russia. 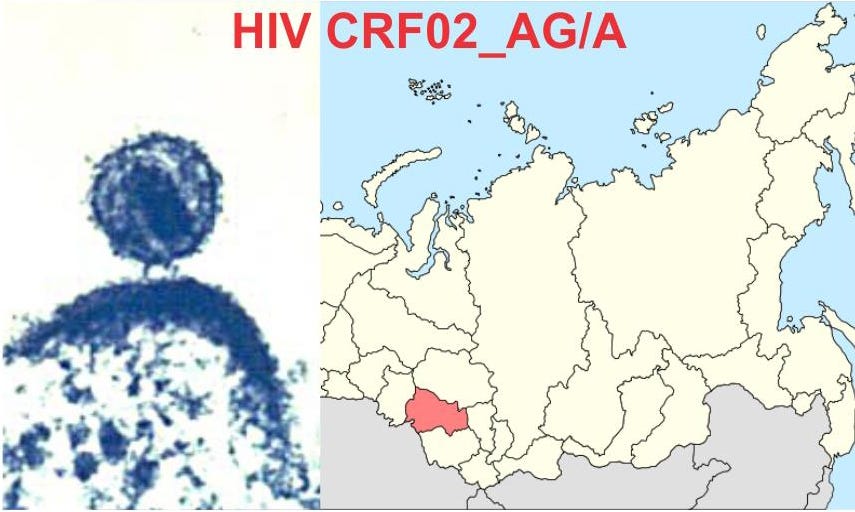 A new strain of HIV is spreading in Siberia and could threaten the world.

Although in the West, the news of this outbreak may seem half a world away, a look back at the history of the strain and where it may head in the future suggests that more attention needs to be paid to this isolated encounter.

I reached out to Dr. Gashnikova in the hopes of gaining some more insight into the situation in Siberia. She sent me a compilation of papers revealing just how problematic CRF02_AG/A might be and the need for worldwide attention.

The Siberian strain evolved from a well-known circulating strain of HIV-1, CRF02_AG, which had been first identified some 20 years earlier in Africa. Taxonomically speaking, CRF02_AG is comprised of a mixture of two specific subtypes (aka clades) of HIV-1: A and G. Within a few years of its discovery, it had become the most predominant strain in Africa and had spread to Central and South America, Central Asia and the Middle East. It had two characteristic traits other than its genetics: it was associated with a slightly lower human survival rate and it could be treated with anti-retroviral drugs.

But according to Gashnikova's papers, the problem with the new CFR02_AG/A has little to do with these traits. Based on the research she and her colleagues at Vector have performed and published, this new strain is a rather mysterious villain that can spread silently and not reveal itself until it is too late.

The lab first identified CRF02_AG/A in 2009 when they performed the usual task of sequencing a virus from an HIV patient. The circumstances were fairly normal. The individual, a male, had acquired the virus in Novosibirsk through heterosexual contact. When the sequences came back, however, they revealed an entirely new strain. Not believing that this was an isolated case, the team went back in time and looked at previously identified HIV samples. They found that half of the new cases in the region were being caused by CRF02_AG/A.

For the team at Vector, this phenomenon had to be better understood. Usually, emerging HIV strains start small and gradually spread. But this strain had become predominant quickly. There had to be something different about it; perhaps it was more virulent or conversely, more able to hide detection. What they found, however, was both.

In order to test virulence, the team looked for the protein p24, which is associated with HIV disease progression in the body. They cultured the virus for 11 days and then looked for the amount of p24 produced. They found twice the level of p24 in the CRF02_AG/A strain in comparison to other circulating strains from the region. The virus was indeed more virulent as it could hasten the progression of disease and potentially the onset of AIDS. Yet when it came to the actual effect of this rapid progression on the body, they found the exact opposite effect. When cells were infected with the CRF02_AG/A strain, they were less likely to be harmed and die.

The conundrum of faster progression of disease without any signs or symptoms was disturbing. If what they found in the lab was correct, then the virus would have been able to spread without warning and as such could be ubiquitous in the region. The team then sought to learn just how widespread CRF02_AG/A was in the community. Their results confirmed their concern.

They examined samples from three distinct regions of Siberia: Novosibirsk, close to where Vector is located; Novokuznetsk, which is in the nearby federal subject of Kemerovo; and Chita, which is on the Eastern rim of Siberia and borders China and Mongolia. The CRF02_AG/A strain was present in both Novosibirsk and Novokuznetsk, although it was dominant only in the former. In contrast, there was no sign of the virus in the city of Chita; it appeared to be strain-free. This somewhat positive outcome was overshadowed by the fact that in Novosibirsk, over 70% of the cases were found to be positive for this strain.

With the data from Novosibirsk in hand, the team tried to work backwards to identify if there was a risk group associated with the spread, such as heterosexual activity, homosexual activity and injection drug use. What came back in the medical records was even more problematic; there was no specific risk associated with infection. The virus has become homogeneous in the population and due to its physical properties, was continuing to spread unsuspectingly from person to person.

As to how this type of spread could have happened, there were few answers. The only real clue was the fact that several of the Novosibirsk samples positive for CRF02_AG/A came from the penitentiary system. Unfortunately, Novosibirsk has one of the highest prison densities in the entire country so no link could be made with any confidence. If there had been a link to one specific group, such as female sex workers or injection drug users, the people at Vector would have found it.

That hasn't happened. In essence, they have a super spreading virus with no idea as to its source.

As to the future, Gashnikova points out in her papers that there is much work to be done both at the molecular and the sociological levels. There will be more papers and definitely more attention from epidemiologists. But there may be a time limit before the curious turns into the catastrophic.

While it appears there is little indication that the virus will spread outside of Novosibirsk at the moment, in the next few months, another area of Russia — Sochi — will be hosting the world for the Winter Olympics. If this strain somehow finds its way across the 2,000 mile distance between these two cities, then there could be a significant increase not only in the number of cases, but the overall spread worldwide.

If this happens, epidemiologists will once again be tackled with the burden of not only tracking the CRF02_AG/A strain, but also finding ways to stop it. Unfortunately, unlike SARS, MERS, H5N1 and pandemic flu, HIV has been spreading without cessation for over thirty years. As Gashnikova suggests in her articles, this problem needs to be studied and stopped as soon as possible. If not, the consequences may be far worse than imagined.